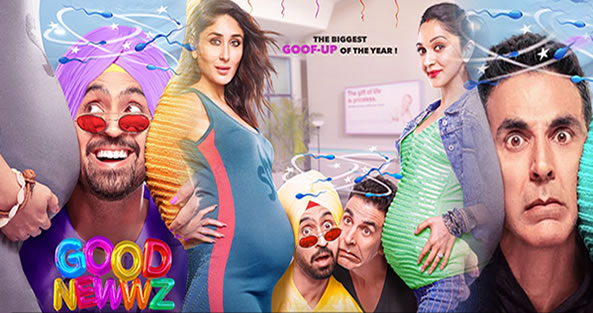 MOVIE RATING
The last Bollywood release of 2019 is anything but good news. Film Good Newwz is an enjoyable saga with ensemble cast of Akshay Kumar, Kareena Kapoor Khan, Diljit Dosanjh and Kiara Advani. First-time director Raj Mehta's Good Newwz is worthy to watch once due to its plot and precise execution.
About the story, when a couple trying to have a baby, are unable to conceive naturally, they decide to go for an IVF (in-vitro fertilization) procedure. But a mix up by their doctor leads to much confusion. Deepti (Kareena Kapoor Khan) and Varun Batra (Akshay Kumar) are a high-class and high-flying married couple, living in Mumbai and are much involved with their respective careers. Deepti is desperate for a child and when she fails to conceive naturally, they opt for IVF. Only hitch, few days after the procedure is through, Deepti and Varun are told there has been a sperm mix-up with another couple with the same last name. Their world turns upside down when they come to know that Varun’s ‘sperm’ has been exchanged with Honey Batra’s ‘sperm’. So now Deepti is pregnant with Honey’s child, while Honey’s wife Monika is pregnant with Varun’s child. Honey (Diljit Dosanjh) and Monika (Kiara Advani) are a loud Punjabi couple and now it’s a complete clash of sensibilities between the two sets of Batras. The two couples are as different as chalk and cheese and what happens when they come to know about this mix up forms the rest of the plot.
Director Raj Mehta guarantees that 'Good Newwz' stays true to its genre with several light-hearted and hilarious moments. Add to that, the pace of the film stays mostly tight. The concept is very simple and foreseeable but the execution is good. You don’t get bored even once and it keeps you hooked right till the end.
But, the performances are top-notch. Akshay Kumar’s comic timing is remarkable and his act is outstanding. Kareena Kapoor Khan is beautiful as Deepti and her act is impressive as the sophisticated Deepti. Diljit Dosanjh is a natural comic actor and his act is enjoyable. Kiara Advani is looking very cute and innocent in her act. Adil Hussain and Tisca Chopra are good in their respective acts.
This film is capable to entertain but jokes aren’t extraordinary. Overall, the actors save the film with their comic timing. The emotional scenes are very strong.
Cinematography is worthy and the screenplay is crisp. Dialogues are amusing and the background score is lively.
Overall, film Good Newwz is worthy to watch once due to its entertaining quotients and comic timings of star cast.